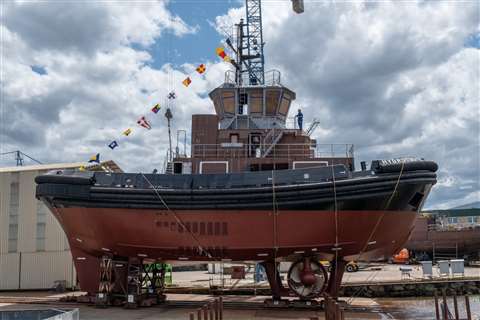 Spanish shipyard Astilleros Armon recently launched the Hydrotug, which will enter operations at the port of Antwerp-Bruges in Belgium in early 2023. (Photo: Javier Carbajales)

What is considered to be one of the first hydrogen-powered tugs in the world has been launched by the Spanish shipyard Astilleros Armon and will enter operations at the port of Antwerp-Bruges in Belgium in early 2023.

“With the Hydrotug, the Port of Antwerp-Bruges is making an important step in the transition to a sustainable, CO2-neutral port,” said Jacques Vandermeiren, CEO at the port of Antwerp-Bruges. “The port is systematically pursuing a policy of making its entire fleet eco-friendly by incorporating the most environment-friendly technologies available on the market.”

The main propulsion system of the Hydrotug consists of a pair of 2000 kW Schottel type SRP 460 RudderPropellers driven by a pair of BeHydro V12 dual-fuel medium-speed engines. (Photo: Schottel)

Each is rated 2000 kW and utilizes 2.4 m diameter propellers. With this thruster configuration, the 31 m long x 12.5 m wide vessel will achieve a bollard pull of about 65 tonnes, Schottel said.

The Schottel RudderPropellers are driven by a pair of BeHydro V12 dual-fuel medium-speed engines that can run on hydrogen and traditional diesel fuel. Combustion of hydrogen does not emit any CO2, and particulate filters and selective catalytic reduction (SCR) reduces emissions of NOx and particulates.

The engines were developed as part of a joint venture between engine manufacturer Anglo Belgian Corp. (ABC) and Compagnie Maritime Belge (CMB) a diversified shipping and logistics group based in Antwerp, Belgium.

Following its delivery, the tug will execute harbor operations in Port of Antwerp-Bruges. 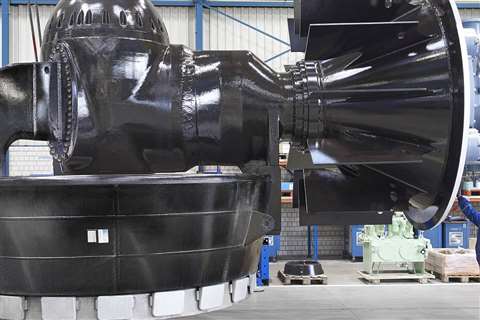 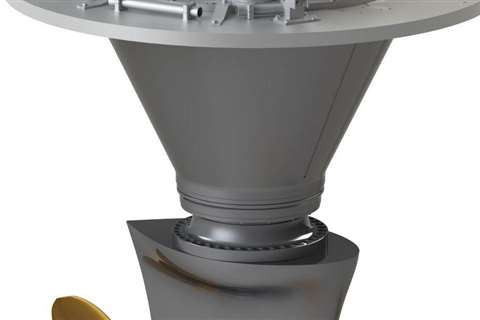