A Gas Engine First For Siemens 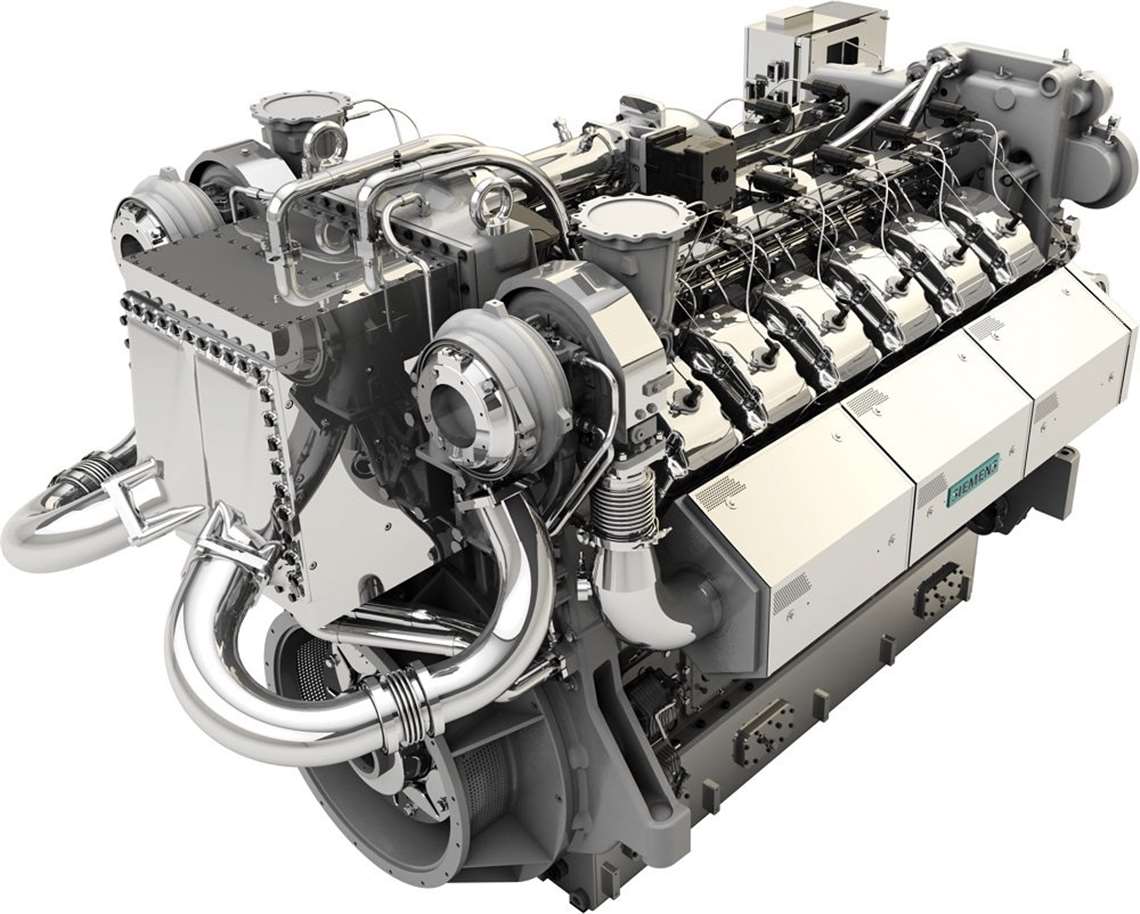 It is still somewhat unusual to see the name Siemens associated with gaseous-fueled reciprocating engines. But with its acquisition of Dresser-Rand in 2015, the German turbine manufacturer added the legacy Spanish engine brand Guascor to its wide product portfolio.

And the company is now reinforcing its position in gas-fueled reciprocating engines, as launching its first 2 MW gas engine for distributed power generation applications. The new E-series engines are available in two versions — the SGE-86EM for 50 Hz markets and the SGE-100EM for 60 Hz regions. The nomenclature SGE indicates Siemens Gas Engines.

Eva Garmendia, manager, Siemens Engine Product Line, said that both 50 Hz and 60 Hz gen-sets are available to the market.

A high-speed, spark-ignited, lean-burn configuration, the 12-cylinder E-series engine is available in 86 and 100 L displacements, yet with an overall package size of 34.5 m3 and a footprint of 12.8 m2, it’s about 31% smaller than competitive 12V engines in the same power category, Garmendia said.

The E-series engines are designed to run on natural gas but Siemens already announced that other fuels will be added soon. In particular, Garmendia said that a biogas engine is planned to debut in the next 12 to 18 months.

The E-series engine was designed from scratch and uses Miller cycle combustion technology that Siemens said delivers a mechanical efficiency of about 47% and an electrical efficiency of 45.4%. The engine is suited for both prime power and cogeneration applications, Siemens said, as well as for combined heat and power (CHP) applications and commercial, industrial, and municipal projects for decentralized power generation.

“The new E-series engine offers a more compact and efficient alternative to the 2 MW engines available in the power generation market today,” Garmendia said. “We can also offer one of the shortest lead times in the industry, with just 24 weeks from concept to delivery of a complete gen-set.”

Among the technical characteristics of this new engine is a newly designed pre-combustion chamber. “The Siemens E-series gas engine uses a gas-fed pre-chamber, together with a high-pressure gas rail,” Garmendia said. “The whole system was modeled prior to engine testing, allowing us a better understanding of the test results and enabling us to define a more controlled flow distribution around the spark plug at the ignition moment.

“This helps to ensure an equal combustion performance for all of the engine cylinders and as a consequence improves balancing. Additionally, the modeling study enabled the use of a lean lambda (optimized air-fuel-ratio) in the pre-chamber and also extended the engine operating limits.”

The E-series gas engine was tested over more than 3 000 operating hours at Siemens’ Engine R&D Center in Miñano, Spain. Siemens reported that the unit demonstrated a reliable and efficient operation with competitive capital and operating costs.

The new engine design also incorporates optimized materials, Garmendia said. “A new alloy material was used in the pre-chamber to achieve a longer life,” Garmendia said. “Other innovative materials include a high-resistance, high-elongation-capable and easy-to-machine material in the cylinder head; forged-steel pistons that allow high peak combustion pressure; and high-temperature-resistant materials for the exhaust system.”

The E-series engine utilizes water-cooled exhaust valve seats in the cylinder head, a first for Siemens engines. “This characteristic will allow for much better cooling and will help extend the life of the valves and seats,” Garmendia said. “As a consequence, this will help lengthen the time between maintenance intervals.”

Maintenance has been another area Siemens looked to improve, Garmendia said. “In comparison to 16-cylinder engines in the same power class, the E-series assures more simplified maintenance events, thanks to its lower number of cylinders which translates into less components costs and reduced time to assemble and disassemble the engine. Thus, maintenance schedules can be optimized in order to reduce service costs.

The E-series gas engine will be used for a CHP application at the Siemens Campus in Erlangen, Germany. The company said the Erlangen Campus will create a new urban district and debut as Siemens’ first CO2-neutral location worldwide.

In collaboration with Erlangen’s municipal utility, the campus will operate on a CO2-neutral basis through use of advanced building and energy technology. A decentralized energy system that uses a separate cogeneration system based on four new SGE-86EM engines will provide district heating and cooling for the campus. The approach to the project will adapt to the existing energy infrastructure and will eliminate expensive development or expansion of the existing infrastructure. The four units are expected to be delivered to the site in 2018.

With the addition of the Dresser-Rand business in 2015, the Siemens portfolio now covers gas engines from 300 kW to 2 MW, industrial and aeroderivative gas turbines from 4 to 66 MW and heavy-duty gas turbines as large as 425 MW. The company estimated that about 4 700 Guascor engines are operating in more than 50 countries around the world.