A hydrogen-powered first in Germany

What’s being called the world’s first hydrogen-powered push boat has been christened in Berlin.

The Elektra, a 20-m long canal push boat, will operate on a hybrid system consisting of 242 DNV-GL approved GO1050 modules with a total capacity of 2.5MWh, delivered by EST-Floattech, as well as three maritime fuel cell systems (NT-PEMFC, 100 kW peak power each).

Although the power of the battery and the fuel cells will be used together to power the electric motors, for complete redundancy the two powertrains are entirely independent systems. 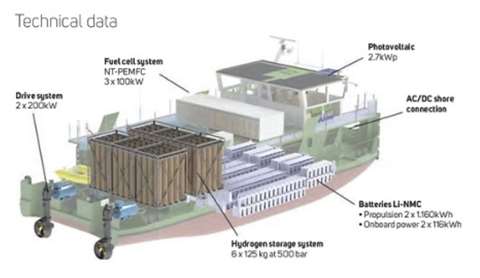 With 750 kg of gaseous hydrogen (at a pressure of 500 bar) on board and a battery capacity of about 2500 kilowatt hours, the ship has a range of about 400 km when sailing in combination with the loaded heavy lift barge URSUS.

The boat is equipped with two Schottel Rudderpropellers type SRP 100 with nozzle (200 kW each) and a Schottel steering and control system. A minimum service speed of max. 10 km/h is reached and a maximum thrust load of 1400 tonnes is available.

The vessel will use the fuel cell technology for the basic energy supply of the power train and for the shipboard electrical system. At peak loads, additional energy is provided by the batteries. The hydrogen supplied to the fuel cell is generated via electrolysis from green electricity generated by wind power.