A Powerful First For Texas 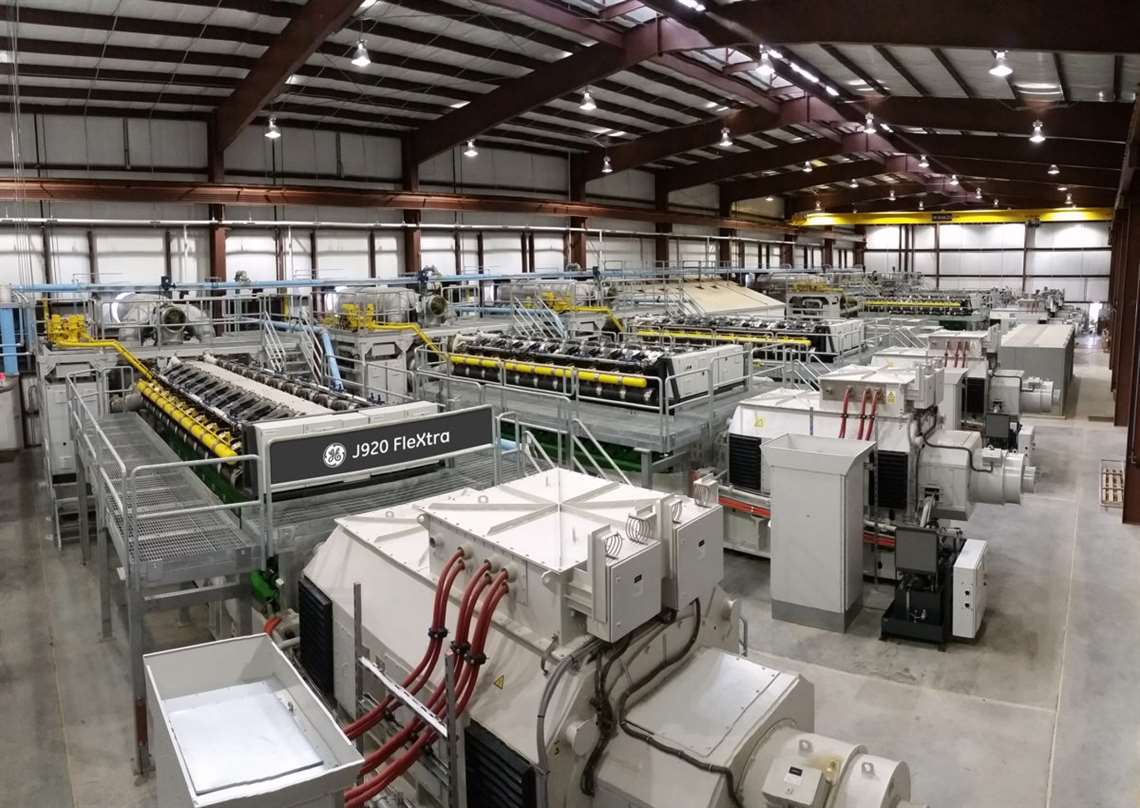 They say everything is bigger in Texas. That goes for the thirst for electrical power, too.

Texas produces and consumes more electricity than any other state, accounting for more than 1/10th of total U.S. energy use. With a growing population of more than 27 million, extreme summer temperatures and extensive industrial and manufacturing sector, it’s no surprise that Texas needs power.

Part of that demand is being met by renewables like solar and wind. Indeed, Texas leads the nation in wind-powered generation capacity with more than 16 000 MW. But the wind doesn’t always blow and the sun doesn’t always shine. So when the San Bernard Electric Cooperative (SBEC) decided it needed to ensure its members power supply would always be ready, it turned to GE’s Jenbacher J920 FleXtra gas engines.

The Sky Global Power One power plant in Colorado County, Texas, incorporates six of the 60 Hz, 8.6 MW J920 FleXtra engines—the first time the engines have been used in the U.S. The plant will supply peaking power for the SBEC in an eight county region of southcentral Texas.

“This is a big first for us in Texas and the U.S.,” said Heiner Markhoff, president and CEO of GE Power, Water & Distributed Power. “The need for energy is growing rapidly in Texas and in the world and distributed power solutions can help meet that demand.”

GE said the Jenbacher J920 FleXtra gas engine —which was first used in Europe in 2013—fits an important and growing power generation need driven, in part, by an increase in the use of renewable power.

“The primary electric transmission system in Texas is independent of the rest of the country,” Markhoff said. “The fundamental challenge of this closed system is that it must meet its needs and the diversifying Texas’s energy portfolio has put wind and solar on the grid but has created new quandaries for grid managers.

“Due to the increasing base of renewable power and the intermittent nature of these energy sources, power plants must be able to offer a great degree of flexibility in a very short period of time to ensure grid stability,” Markhoff said. “To put it simply, backup solutions are needed for wind and solar when the wind stops, when it’s dark or when clouds reduce solar yields. Distributed power, as the project here shows, is an obvious solution.”

“Offering best in class efficiency of over 49%, coupled to fast start capability makes this an excellent, reliable solution for many applications,” said Niall Prendiville, product line leader for GE’s Distributed Power business. “We see a great opportunity for the Jenbacher J920 FleXtra gas engine in the U.S.”

Even countries like the U.S. that have reliable access to electricity face challenges as they look to upgrade an aging power infrastructure, Markhoff said. The Jenbacher J920 FleXtra gas engine offers wide-ranging flexibility to address those challenges.

“One out of six people in the world lack access to electricity…and even here in the United States, where you have reliable energy, we face challenges, too, with an aging infrastructure and economic and environmental and efficiency challenge,” Markhoff said. “We all know reliable and flexible power is key to economic success and with Texas home to some of the fastest growing cities in the country so when it comes to rolling blackouts, backup power becomes even more important.”

The SBEC has about 25 000 customers across eight counties and the region isn’t seeing the same population growth that happened during the gas and oil exploration “explosion,” said Billy Marricle, president and general manager of SBEC. Still, with fast-growing San Antonio to the west and Houston to the east, the region’s population continues to increase.

“We still are a bedroom community of Houston, Texas, so we are continually growing in the residential segment,” Marricle said. While the growth has slowed, there are still more than 3500 home sites nearly ready for construction to start, which points to growing demand for power in the SBEC, Marricle said.

Sky Global Partners helps design, build, finance, own and operate customized special purpose electric generation for municipal utilities, rural electric cooperatives, oil & gas producers, and large industry throughout the U.S. Sky Global Partners contracted with Haskell of Jacksonville, Fla., to design and construct the overall power plant and GE supplied the core equipment, including the gen-sets and the exhaust emission reduction systems. The financial collaborators for the plant are Sky Global Partners, Prudential Capital Group and The Lincoln National Life Insurance Company. The Sky Global Power One project for SBEC broke ground in January 2015 and the plant was online in April 2016.

“This project is a testament to our strong relationship with Sky Global Partners. The plant will not only serve the electrical needs of our membership when needed, but it also will be a merchant plant for others when not serving our needs,” Marricle said. “This is a significant part of our power strategy going forward and provides us with protection from electricity exchange price spikes and the opportunity to increase the value of our cooperative.”

Marricle said the plant’s price for energy will rival some of the renewable pricing in the market and “it doesn’t need sunshine, doesn’t need the wind blowing.”