Gas transmission system operators Gasgrid Finland and Nordion Energi and two industry partners say they are exploring the development of a hydrogen pipeline infrastructure in the Baltic Sea.

Along with OX2 and Copenhagen Infrastructure Partners, the gas transmission system operators launched a project called the Baltic Sea Hydrogen Collector (BHC), envisioned to be an offshore pipeline project that will connect Mainland Finland and Sweden with Finnish Åland island and Germany by 2030. The offshore project may also be connected to other energy islands in the region such as Gotland and Bornholm in Sweden and Denmark, the companies said in a news release. 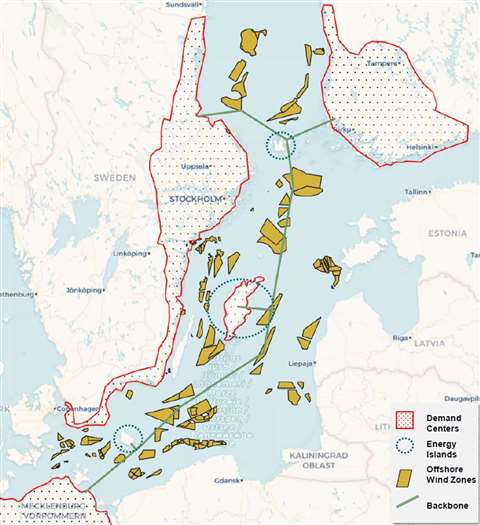 “There is a significant potential for production and use of hydrogen in countries surrounding the Baltic Sea as well as for developing offshore wind and hydrogen production,” the companies said in a news release. “The Baltic Sea region has excellent conditions for the production of onshore and offshore wind energy. With strategic investments in the infrastructure, renewable energy, and hydrogen production, up to 55% of the clean hydrogen target defined in the REPowerEU Plan can be produced in the region simultaneously supporting innovative decarbonization projects within each country as well as helping the EU to meet its overall goals.”

The aim of the Baltic Sea Hydrogen Collector is to unlock the significant offshore wind potential, in Bothnia Bay and the Baltic Sea region, creating a Booming hydrogen market and connecting both supply and demand.

The European Hydrogen Backbone (EHB) initiative, begun in 2020, aims to Accelerate Europe’s decarbonization journey by defining the critical role of hydrogen infrastructure – based on existing and new pipelines – in enabling the development of a competitive, liquid, pan-European renewable, and low-carbon hydrogen market. Development of hydrogen infrastructure will be a prerequisite for renewable hydrogen market creation and market integration.