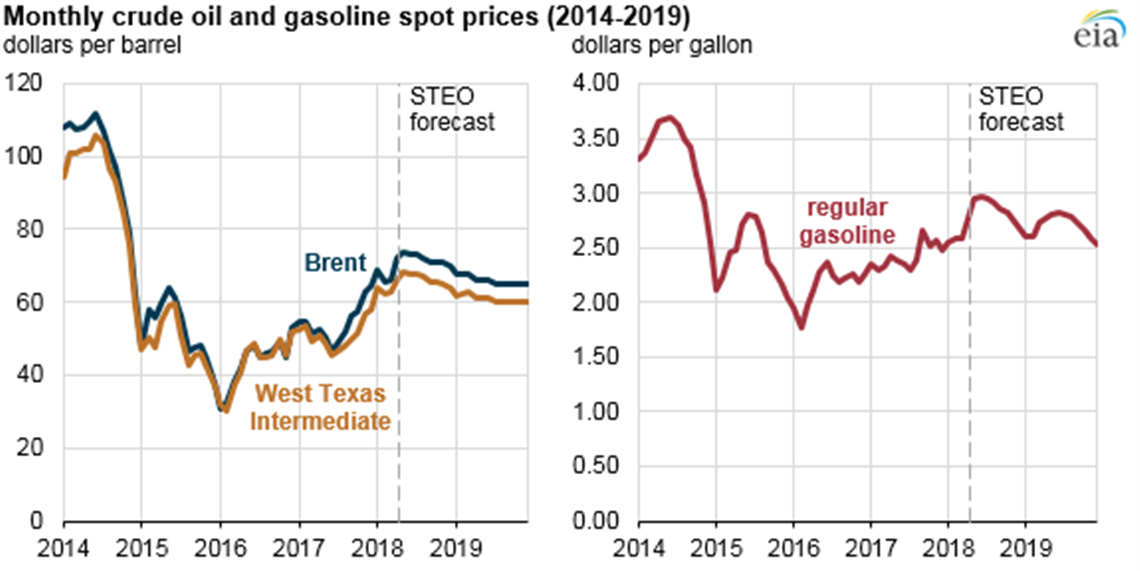 The U.S. Energy Information Administration (EIA) has revised its crude oil and gasoline forecast for the rest of 2018.

The EIA now believes that Brent crude oil prices will average US$71 per barrel (b) in 2018, $7 a barrel higher than last month’s short-term energy outlook (STEO). Correspondingly, EIA’s forecast for regular gasoline retail prices increased to an average of US$2.79/gallon (g) in 2018, $0.15/g higher than in last month’s STEO. Monthly average Brent crude oil spot prices have increased in 9 of the past 10 months, most recently averaging $72/b in April.

EIA estimates that global oil inventories fell an average of nearly 0.6 million barrels per day (b/d) in each of the past five quarters (January 2017 through March 2018). Oil inventories for countries within the Organization for Economic Cooperation and Development (OECD) at the end of April were an estimated 3% lower than the previous five-year average (2013–2017) in terms of days of supply, the largest percentage below the five-year average since March 2014.

In April, when EIA developed the May STEO, several geopolitical risks presented sources of uncertainty. These risks, including the re-imposition of oil sanctions against Iran and the upcoming results of May elections in Venezuela, may materialize into actions that remove oil supplies from the global market and, in turn, tighten global oil balances.

Since the publication of the May STEO, the United States announced that it would withdraw from the Joint Comprehensive Plan of Action with Iran. This news and resulting price movements are not reflected in the May STEO, issued May 8, but EIA will consider these developments when formulating the June STEO.