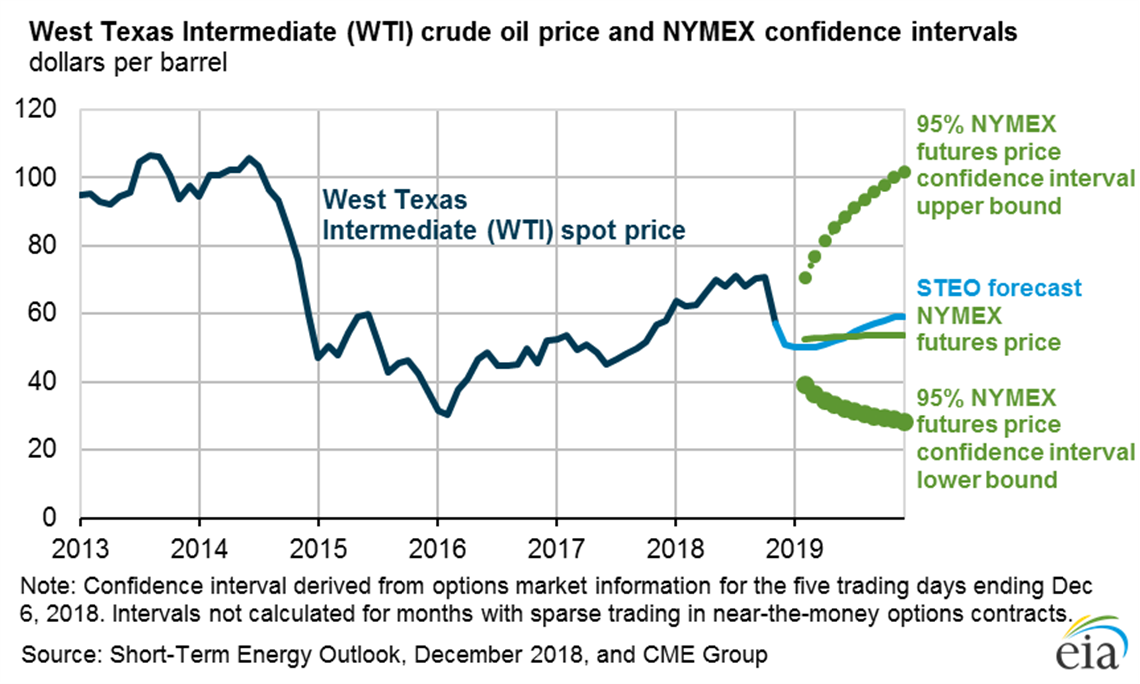 Both are US$11/b lower than forecast in November.

The EIA also noted that Brent crude oil spot prices averaged US$65 per barrel (b) in November, down US$16/b from October, the largest monthly average price decline since December 2014, according to the U.S. Energy Information Agency (EIA).

“Market uncertainty during November appears to have contributed to levels of price volatility for Brent and West Texas Intermediate crude oils not seen in several years,” EIA administrator Lisa Capuano said in a statement.

The downward revision comes even afte OPEC announced that it would cut production in 2019. EIA said it expects that the magnitude of the recent price declines combined with the OPEC production cuts will bring 2019 supply and demand numbers largely into balance, which EIA forecasts will keep prices near current levels in the coming months.

The ultra-low sulfur diesel (ULSD)–Brent crack spread approached a four-year high in mid-November of 52 cents/gal and averaged near the top of its five-year range in November. U.S. distillate inventories remain 10% lower than the five-year average, and the increasingly tight market was met by colder than
normal weather.

In natural gas, the Henry Hub natural gas spot price averaged US$4.15/million British thermal units (MMBtu) in November, up US$0.87/MMBtu from the October average. Cold temperatures and low inventory levels contributed to the increase in price, the EIA said. Despite low inventory levels, EIA expects strong growth in U.S. natural gas production to put downward pressure on prices in 2019. EIA expects Henry Hub natural gas spot prices to average US$3.11/MMBtu in 2019, down 6 cents from the 2018 average and down from a forecast average price of US$3.88/MMBtu in the fourth quarter of 2018.