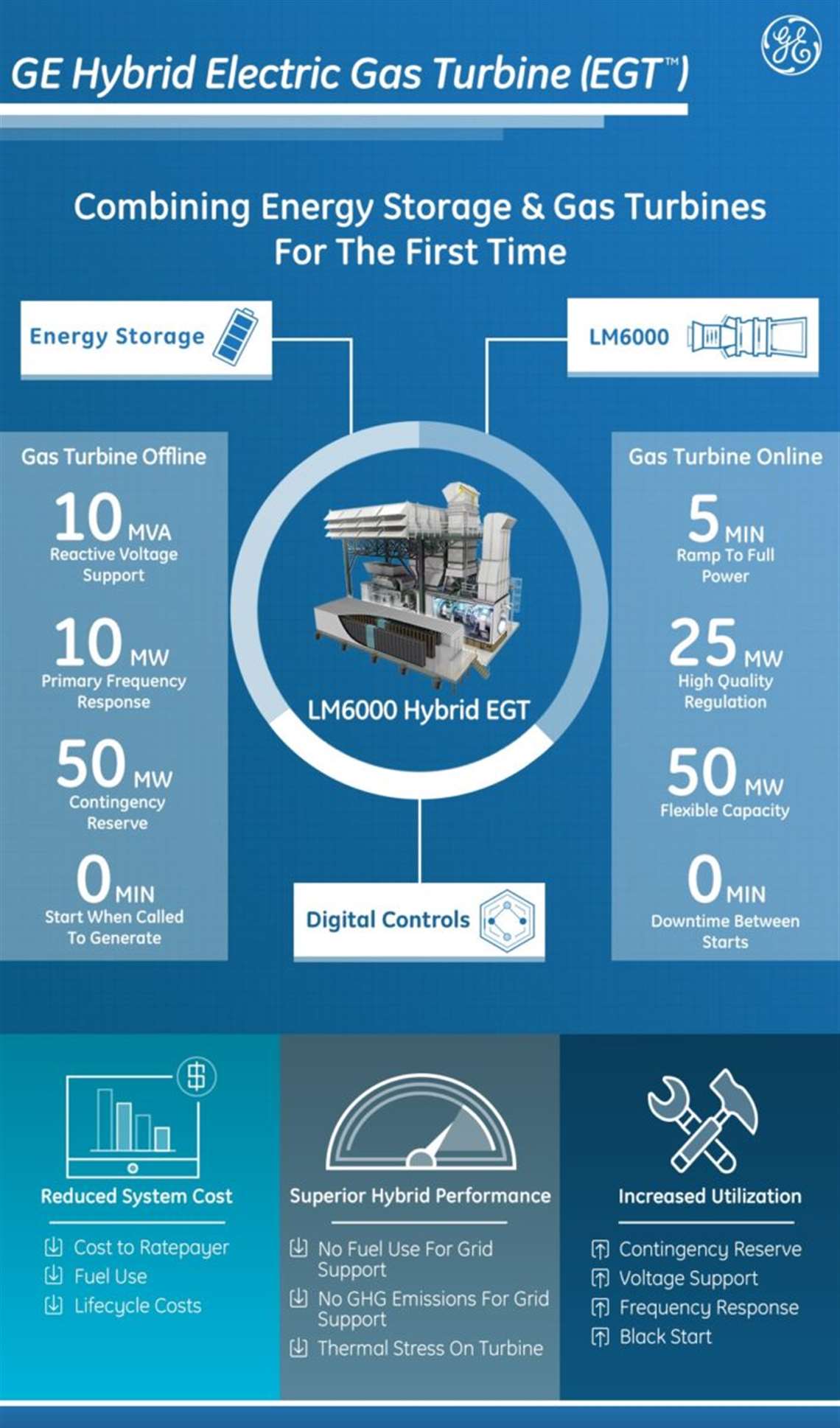 GE said it is expanding its battery storage solutions to all of its power plants globally.

The company said its battery storage system works kind of like a hybrid car: gas turbine peakers and batteries wrapped in a single, efficient package with sophisticated power-management software.

“With a hybrid gas turbine, you don’t have to run the turbine at all,” said Brian Gutknecht, chief marketing officer for GE Power. “If power is called for, batteries can provide immediate power. Meanwhile, you can start up the gas turbine.”

By the time the batteries run out of power, the turbine will be up and running — powering the grid and recharging the batteries, the company said. In April, Southern California Edison deployed this solution at two sites near Los Angeles. The system is expected to lead to a 60% reduction in greenhouse gas emissions and air pollution. The California hybrid combined a 50 MW turbine, capable of reaching full power in about 5 minutes, and a 10 MW battery assembled from lithium-ion cells that lasts up to 30 minutes.

“The new system delivered what we’d been looking for: immediate response capability from the peakers,” said Vibhu Kaushik, principal manager of asset management and generation strategy at SCE.

GE is now making this solution available on all of its gas- and coal-fired power plants, some of which produce enough electricity to power the equivalent of millions of households. GE’s power plant on wheels, the TM2500, as well as HA gas turbines, are included in the expansion. The company also has plans to include wind turbines, solar PV modules and hydro plants.

“The plant in California was kind of a services upgrade, if you will,” Gutknecht said. “But with all of our new plants, we’re going to give a battery option as well.”

GE engineers also developed software that allows the utility to manage, in the most optimal way, how fast the battery discharges and how quickly the turbine needs to ramp up from full stop.

“Anybody can put a battery next to a turbine,” said Mirko Molinari, general manager for digital grid at Grid Solutions from GE Energy Connections. “The magic is in integrating the controls.”

As battery costs continue to drop, it will make economic sense to deploy customizable battery systems of various capacities at an ever-widening array of plants, GE said. Gutknecht imagines a future where a variety of plants — wind, solar, gas and others — are working together to produce efficient energy while lowering costs.

“As an industry, I think we’re just scratching the surface in terms of the opportunities to optimize these hybrid solutions,”Gutknecht said.