US$1 billion plant will use two 7F.05 gas turbines

The plant, owned and operated by Consortium Group Energy Gas Panama which includes private companies InterEnergy Group and AES Panama, will be built in Telfers Island, near the port of Colón, next to the Panama Canal. The project has an estimated pricetag of US$1 billion.

GE said the plant is expected to play a crucial role for the diversification of Panama’s energy mix which currently relies heavily on hydroelectric power generation, and its operational flexibility will support additional renewable penetration which will be crucial for Panama’s goal to generate 70% of its energy from renewable sources by 2050, as laid out in the Panama’s National Energy Plan.

The use of renewable energy sources is continuously being expanded in Panama, but the grid infrastructure still requires highly efficient and flexible gas turbine technology to support the variable nature of renewables and help us improve the reliability and stability of the country’s electrical system.

“Once in operation in 2024, Generadora Gatún is expected to be the largest and most efficient natural gas fired power station in Panama and all of Central America” said Jorge Perea, CEO of Generadora Gatún. “With this plant, which will use highly efficient and flexible gas turbine technology, the energy matrix is strengthened by inserting firm power, which gives reliability to the system and an important step will be taken in the transition towards a much more sustainable generation backed by more sustainable energies”. 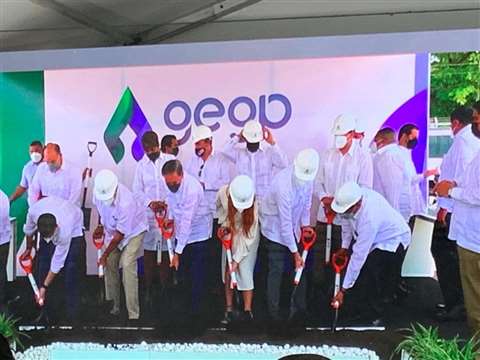 The act of beginning of the construction phase of the Gatun Generator was attended by the President of the Republic Cortizo Cohen along with several ministers and representatives of Grupo Energético Gas Panama (InterEnergy Group and AES Panama).

“We are very proud to participate in the Generatora Gatún project and celebrate its kickoff with Panama’s President, local authorities, and Consortium Group Energy Gas Panama,” said Luis Felipe, GE’s President of Central America and Latin America region. “We look forward to realizing this project for the future of energy in Panama. The scope of this project includes providing our most advanced F-Class gas turbine technology and power generation equipment, but also working more broadly with InterEnergy and AES to tailor a service agreement including remote monitoring from the Atlanta-based Monitoring & Diagnostic Center that will help drastically reduce risks, disruption and help avoid downtime of the plant.”

The plant will use natural gas provided by AES’s LNG storage (180,000 cubic meter) and regasification facility built for Panama and Central America in 2018. This terminal was the first to provide LNG in the country and has provided natural gas to support the growth of the power, industrial and the transportation sector in the country. The use of the LNG regasification infrastructure will be a key aspect to turn Panama into a regional energy hub.

GE established its first office in the Central America region in Honduras, in 1906. It has since expanded throughout Central America and the Caribbean and participated in large-scale projects, such as the Panama Canal. GE produced about half the electrical equipment needed during construction of the Panama Canal and participated in the construction of the power plants that provided the canal with electricity and engineered the centralized control equipment for the locks.