Project would be on the island of Flotta

A consortium that includes TotalEnergies is studying the use of offshore wind to power the production of green hydrogen on an industrial scale.

The consortium, known as Offshore Wind Power Ltd. (OWPL), was formed by Macquarie’s Green Investment Group, TotalEnergies and Scottish developer Renewable Infrastructure Development Group (RIDG). The project under study is on the island of Flotta in Orkney, Scotland.

If successful, its proposal – called the West of Orkney Windfarm – could deliver renewable power to a green hydrogen production facility at the Flotta Terminal. 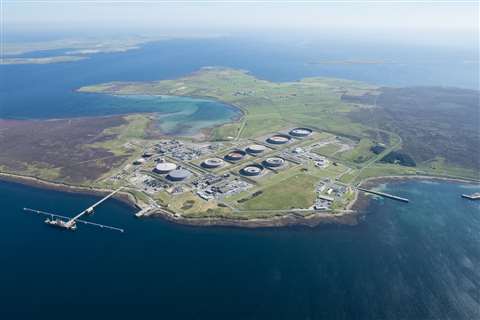 Plans to power the proposed Flotta Hydrogen Hub are being developed by OWPL in partnership with Flotta Terminal’s owner Repsol Sinopec, and Uniper, a leading international energy company and pioneer in the field of hydrogen. The proposal is also supported locally by EMEC Hydrogen who have spearheaded Orkney’s leading position in green hydrogen production.

“We believe that green hydrogen could provide a critical alternative route to market for some of Scotland’s largest offshore wind projects and play a significant role in creating wider economic benefits as the North Sea goes through its energy transition,” said Edward Northam, Head of Green Investment Group Europe. “We look forward to working with the Flotta partners to continue to develop this proposal.”

“TotalEnergies believes in the potential of renewable offshore wind power to produce green hydrogen, supporting our companies to meet their ambition in terms of carbon neutrality. With our proposed West of Orkney windfarm, there is an opportunity to create one of the world’s first green hydrogen plants in Orkney. It is an exciting plan, and we look forward to working on it with our partners and Orkney stakeholders.” said Julien Pouget Senior Vice President Renewables, TotalEnergies.

The Flotta Terminal has been in operation since 1976 and has made a significant contribution to Orkney’s economy and communities for more than 40 years. This project would enable the terminal to be progressively transformed over time into a diversified energy hub where conventional oil and gas operations continue, co-existing alongside the development of a sustainable long-term green future for the facility. The repurposing of Flotta will require local stakeholders support, retaining and upskilling the current workforce as well as the creation of long-term skilled jobs during both construction and hydrogen operations.