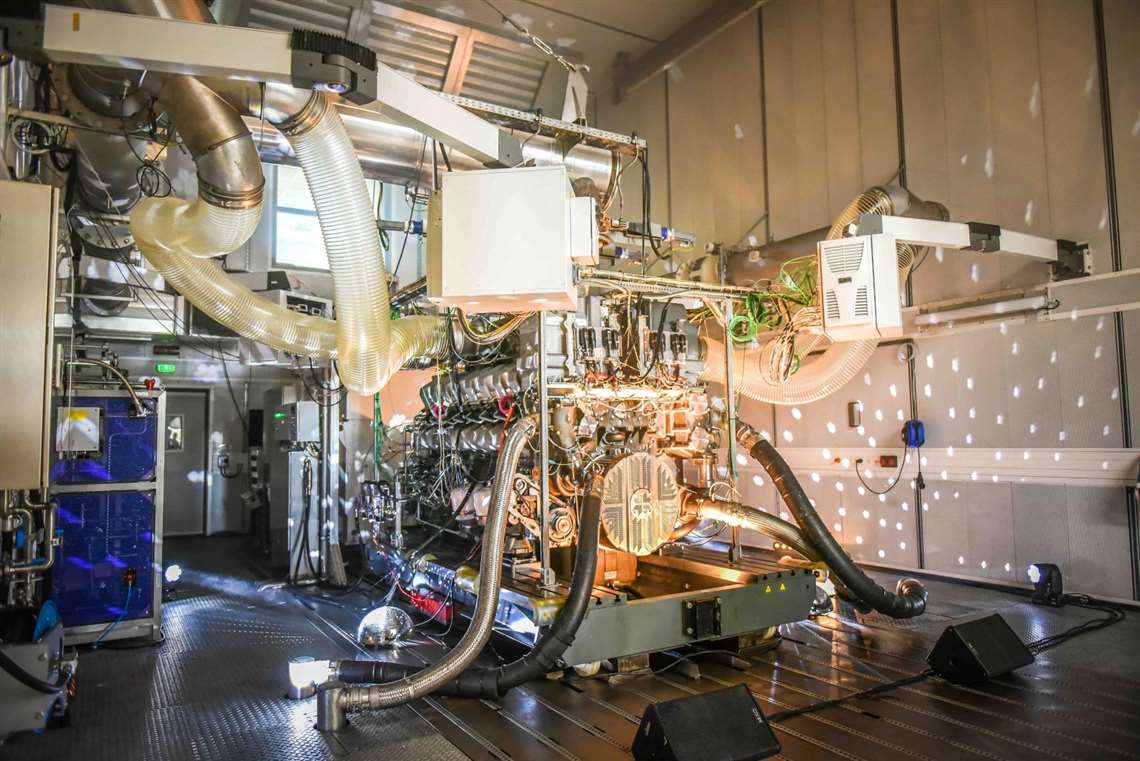 With the inauguration of a new assembly line for the production of large diesel engines in early October, Liebherr finalized the establishment of its new assembly plant in France. Construction of the plant in Colmar started in 2012. By 2014, the construction was completed and the company moved in. In 2016, Liebherr secured an agreement with Kohler/SDMO for the supply of its D98 engines for SDMO’s gen-sets – in which they are officially referred to as KD175 series engines.

That engine serial production, now limited to 12-cylinder and 16-cylinder units for the gen-sets under the agreement with Kohler, closed at near 100 units in 2017 and is expected to reach about 250 in 2018 with a forecast of around 500 units in 2019. The ramp up of production includes the diversification of applications for the new D98 engine series, which is expected to be utilized in heavy mining vehicles, in locomotives, and in stationary application for the oil & gas industry.

The 12-cylinder D9812 diesel engine is currently undergoing field test in a Liebherr 240-tonnes mining truck in the USA and in a 400-tonnes Liebherr R9400 mining excavator in a quarry not far from Colmar.

According to Diethard Plohberger, managing director of Liebherr Components Colmar SAS, field tests under real mining conditions will follow soon with various mining customers. “Furthermore, we will start with the first project for the development of an engine to power locomotives in 2019,” said Plohberger. “Beginning in 2019, we will also start with the tests of a 20-cylinder D9820 engine for power generation applications.”

What is particularly interesting about this new series of Liebherr engines is, according to Plohberger, the fully standardized approach which translates into a minimum of parts to be kept in stock with a significant saving for the manufacturer and for customers too.

The visit to the plant is rather impressive: the incoming goods area covers 2000 m2 and there is possible to unload two trucks at the same time. The plant deals with about 350 trucks per month and the logistic team is composed of 24 people.

After the goods income, there is a metrology lab with two Zeiss measuring machines and one Faro measuring arm, among other state-of-the-art equipment. The lab is controlled for temperature, humidity and luminosity and is utilized to check components from external suppliers, components for the R&D department, and to measure tools used in the assembly line.

At the time this article is written, the first engine block for the 103-L, 20-cylinder engine is set on one of the large measuring benches. The first measurements are being taken to prepare for the engine’s testing procedure starting next year.

The components arriving from external suppliers are stocked in a shelved area with automatic picking that can store up to 3300 Euro pallets. Some 1300 additional stocking places for non-palletized items are available in a separate area.

The new assembly line is pretty automated, considering it handles quite large units. It is composed of 12 stations in the main assembly line, plus six stations for pre-assembly operations.

The V12, V16 and, in future, V20 diesels are moved from station to station on special trolleys. At each assembly station, special rotating supports make it possible to rotate the engine 180° in both directions for an easy access of the operators from all sides.

Each assembly station is equipped with electronic screens that handle all information about the engine units on the line. For example, the operator scans the barcode of all critical components being assembled, which are thus associated with the specific engine unit. The same operator follows the unit along all the assembly stations. While the training takes a bit longer this way, Liebherr believes that having the same person involved in all assembly stages is important for flexibility but also for a more in-depth involvement of the operator.

At the end of line, each engine’s oil ducts are flushed with oil to be cleaned. The engines are then tested for an automated run lasting about three hours. The test department is composed of four test beds with 16-MW of power in total, used for end-of-line testing but also for R&D activities. While running test engines, the test facilities give up power to produce electricity for the plant but also to be fed into the Colmar town power grid. In 2017 Liebherr-Components Colmar supplied 10 million kWh to the local community which covered the needs of 2000 households as a contribution to environmental protection.

After testing, the engines go through painting and are then prepared for shipment. Depending on the destination, the unit are packed with different methods including the use of drying bags for engines shipped by sea. Liebherr’s shipping department calculated that engines can resist within their own package for a period of up two years.

The employee count at the Colmar plant reached 230 people this year and is expected to grow to 341 by the end of 2020. Liebherr invested in total around €10 million into the new production line which was put in full operation in May 2018.