Rolls-Royce OKs use of synthetic diesel

Following successful trials on the test bench and in the field, Rolls-Royce business unit Power Systems has approved its Series 1600 and Series 4000 generator sets for use with EN15940 synthetic diesel fuels.

In addition to GtL (Gas to Liquid) and CtL (Coal to Liquid), these fuels include also the sustainable fuels BtL (Biomass to Liquid), HVO (Hydrotreated Vegetable Oil) and PtL (Power to Liquid) such as e-diesel. They can all replace conventional diesel fuel, which is made from fossil petroleum.

“There is already a lot of interest in HVO in particular from many customers in the energy industry and data center business who want to improve their carbon footprint,” said Tobias Ostermaier, president, Stationary Power Solutions at Rolls-Royce Power Systems. “The results from pilot customers show a significant reduction in greenhouse gases, nitrogen oxide and particulate emissions by using HVO instead of fossil diesel in their gensets.” 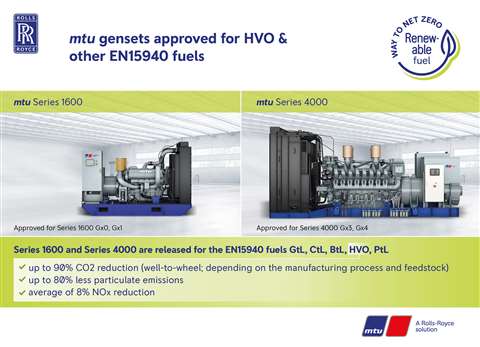 Waste vegetable and animal fats and used cooking oils can be used as base materials for HVO, which are converted into hydrocarbons by means of a catalytic reaction with the addition of hydrogen. Through this process, the fats and vegetable oils are adapted in their properties to diesel fuel and can supplement it as an admixture or replace it completely. The advantages of HVO are clean combustion with a reduction in particulate emissions of up to 80 percent, nitrogen oxide emissions by an average of eight percent and (depending on the manufacturing process and feedstock) CO2 emissions by up to 90 percent compared to fossil diesel. Because HVO fuel is produced from renewable raw materials, its production, transport, and combustion generate only about as many greenhouse gases as were absorbed by the plants during the growth of the biomass.

The tests confirmed that mtu engines perform well when using HVO (as compared to diesel) in terms of maximum power, load acceptance and fuel consumption. HVO is a drop-in fuel, which means that there are no adaptions needed to the diesel plant infrastructure, hardware or software for its use. In addition, the storage stability of this synthetic fuel is significantly better than that of biodiesel, making it even more attractive to emergency power system operators.

As part of its sustainability program, Rolls-Royce announced in the middle 2021 that it would realign its product portfolio so that by 2030, new fuels and mtu technologies can save 35% greenhouse gas emissions compared to 2019 levels. The company is now already successfully operating an mtu fuel cell system, has established a clear roadmap for the introduction of hydrogen engines, and is now progressively releasing further engines in more applications to run on sustainable fuels.