Each quad screw ship will operate a quartet of award-winning TG100 shaft seals.

The contracts mark a significant step forward for the Canadian manufacturer in the United Arab Emirates’ commercial and naval vessel markets, Thordon said in a news release.

Rafid Qureshi, managing director of Dubai-based Ocean Power International (OPI), Thordon’s authorized distributor in the region, said the contract was “a direct result of the yards’ recommendations” following the success of TG100s retrofitted seven years ago to a 28m [91.9ft] tug.

The government-operated tug entered Drydocks World-Dubai yard in late 2014 after a competitor’s shaft seal failed during dredger support operations in the Persian Gulf. 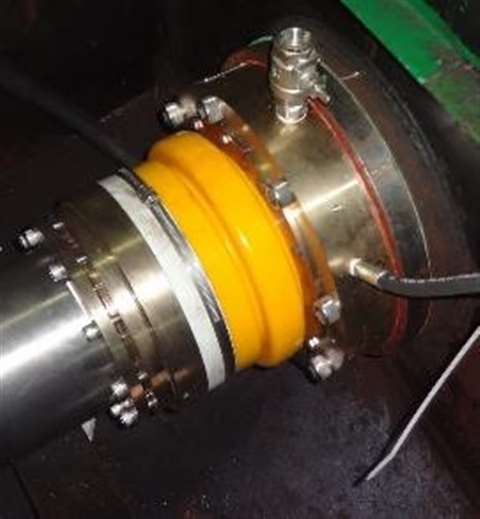 Thordon Bearings has confirmed it has secured contracts to supply 24 TG100 propeller shaft seals to Drydocks World-Dubai and Abu Dhabi Shipbuilding and Repair yards for installation to six UAE Navy vessels. This TG100 seal was installed in 2015.

“The tug was taking on water but because the seal didn’t have an emergency return-to-port function, it had a real tough time getting back safely,” said Qureshi. “The failure was of huge concern to the owner as it could have ended in tragedy. Apparently, failure is not uncommon with these seals.”

Based on the Drydocks World-Dubai experience with, and reliability of, Thordon’s bearing products (the tug’s 200mm [7.874in] diameter shafts were each operating XL propeller shaft and SXL rudder bearings) it was decided that both seals would be replaced by TG100s.

“With hundreds of units now in service, this seal is a vitally important component to vessel safety, protecting both crew and vessel,” said Thordon Bearings’ Technical Director Tony Hamilton. “The design’s inflatable secondary seal means a vessel can return safely to the nearest port if the seal is badly damaged, preventing water ingress and potential sinking.”

Drydocks World-Dubai and Abu Dhabi Shipbuilding and Repair are part of the Platforms and Systems cluster of EDGE, an advanced technology group for defence and beyond, which ranks among the top 25 military suppliers in the world.