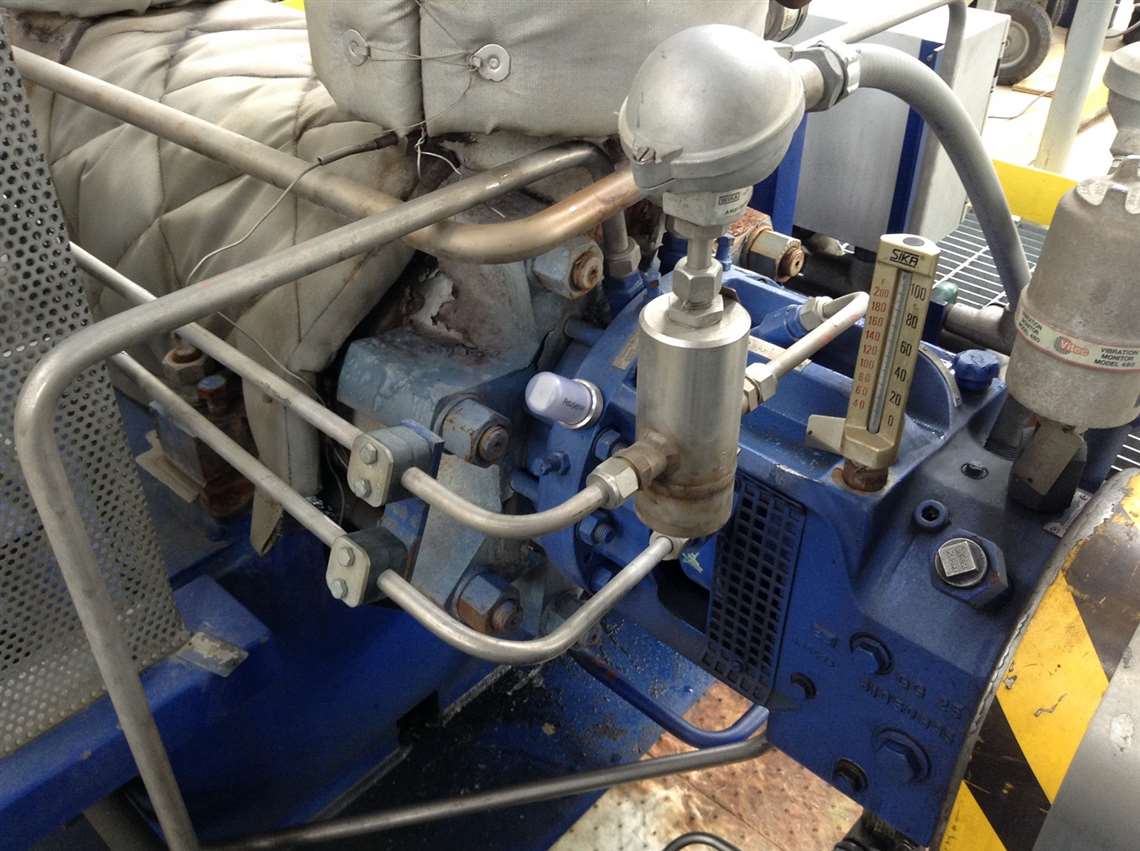 Gathering and analyzing sensor data from machinery is a common practice for maintenance and reliability professionals in the power generation and gas compression industries. Many companies, though, only monitor a fraction of their critical assets continuously, leaving data gaps on the rest of their equipment.

“ARO incorporates data from multiple sensors and sources. We started with vibration data and have expanded to temperature, pressure, ultrasound, current and more to help paint a holistic picture of an asset’s health,” said Jon Bernie, sales and marketing manager for Petasense. “It’s a full end-to-end system that collects and analyzes multiple parameters of data, enabling industrial users to make informed decisions about their assets in real-time.”

The ARO system uses wireless sensors – including Petasense’s own vibration mote – to gather data from a piece of equipment. Those sensors relay that information over WiFi. That information then gets transferred to the company’s cloud-based software. Industry professionals can access that information from a computer or smartphone through a web browser or mobile app.

Bernie said the ability to monitor any equipment makes the system applicable across multiple industries and useful to companies even if they already have a monitoring platform in place.

“We provide real-time analytics on the health and performance of assets that traditionally would run-to-failure or be maintained reactively,” he said. “A subset of the most critical assets (turbines, generators) might come out of the box with instrumentation, but there is a huge distinction between these ‘protection systems’ and the ARO system. The vast majority of critical ‘balance-of-plant’ assets (motors, pumps, compressors) are not continuously monitored and that’s primarily where we fit in.”

Petasense’s vibration mote is a wireless, battery-powered triaxial vibration and temperature sensor that communicates by way of Wi-Fi. The company has two variations of the mote – 1.6 kHz and 5.5 kHz bandwidth. The 1.6 kHz model detects imbalance, misalignment, structural and rotating looseness and late-stage bearing wear. The 5.5 kHz version incorporates everything from the 1.6 kHz model, and adds early stage bearing wear, pump cavitation and gear teeth problems to its detection capabilities.

The Petasense transmitter, launched in the summer of 2018, is a wireless, analog sensor-input module that can accommodate up to nine sensor channels through three M8 ports. The transmitter also has an Ethernet port used to continuously power the device as an alternative to batteries.

In addition to supporting sensors from Petasense – including ultrasound, pressure and current sensors – the transmitter can also handle most third-party industrial sensors (4 to 20 mA or 3 to 30 V). The transmitter features an ARM microcontroller processor, 16 MB of flash memory and an operating temperature range that mirrors the vibration mote. The transmitter measures 3.9 X 3.9 X 1.2 in. (100 X 100 X 32 mm). Both the vibration motes and the transmitter are rated for Class I, Div. II hazardous environments and have IP67 waterproof certification.

Petasense’s ARO Cloud completes the ARO system puzzle, taking the collected data from the sensors and transmitter and presenting it in a variety of structures, such as trend, waveform and spectrum charts. A machine-health dashboard allows users to access real-time statistics of their machinery, while also being alerted if action needs to be taken.

The ARO Cloud has an open architecture, allowing two-way integration with external systems, such as data historians (OSIsoft Pi or eDNA), as well as EAM software (IBM Maximo or SAP EAM) using REST APIs. It also powers a real-time events framework that allows users to set role-based alarms and notifications.

A key element of the cloud platform is Petasense’s Machine Learning analytics. Machine Learning uses data-science algorithms and multi-parameter analysis to provide real-time health scores for a user’s assets. By considering operating parameters like pressure and flow, the system can make better diagnoses about asset condition and the impact of process variations. With a health score, along with other benefits from Machine Learning, users can make maintenance-based decisions without the expertise from either an in-house or third-party vibration analysis expert.

“One of the problems is collecting data continuously, but the bigger issue is analyzing the data and getting insights to drive decision-making,” Bernie said. “Those skills are rare and even harder to find these days with a changing workforce.

“There is a great need for an automated system that turns raw, industrial data into actionable insights,” he said. “This allows customers to focus on their core competency. For those who don’t have a vibration expert in house, our goal was to put a system in place that gives them some transparency into the condition of their assets.”

Machine Learning plays an imperative role with the ARO System, but Bernie said it has the potential to “bridge the education gap” that affects many industries, including gas compression. Decades ago, many employees would stay at a plant for 30 or 40 years, which allowed them to learn about all the intricacies of their work environment and the equipment within it. With those employees inching closer to retirement, the younger generation doesn’t have the same level of experience.

“The younger generation isn’t focused on careers in machine maintenance or vibration analysis. They want to be computer programmers and data scientists,” he said. “Industrial plants need something in place that can carry on the tribal knowledge of the retiring generation. That’s where this kind of technology comes in.

“You can bring a lot of data into a system, but if you’re not giving your customers insights to make decisions, it won’t help them,” Bernie said. “Having a digitized version of that veteran plant worker – as a smart system – can help retain consistency throughout a plant and across an organization.”

Petasense opened its doors five years ago thanks to two owners – Abhinav Khushraj and Arun Santhebennur – with software development backgrounds. After watching how well data collection devices, such as Fitbit and Nest, gained popularity with everyday consumers, the pair decided to bring that same experience to the industrial sector.

The landscape has changed dramatically since Petasense launched the Vibration Mote. Wireless monitoring, a once cost-prohibited luxury, has become more commonplace and affordable. The expansion of wireless infrastructure, including WiFi and cellular, has made it easier to reach remote areas.

“Automation of data collection and analysis is going to becoming more common in the industrial space,” Bernie said. “There’s a digital movement that has shifted how many industries operate and is now making its way into the industrial sector. Companies are going digital, moving away from local server-based technologies to something more scalable and enterprise friendly.”

The company’s reach has also expanded in the past five years. Petasense serves customers in a variety of industry verticals including oil & gas, power generation, mining and critical facilities. In the coming years, the company hopes to gain more traction in the gas compression industry. The energy sector has been a strong adopter of Petasense’s technology, making up a large percentage of their current clients.

“It’s still somewhat early,” Bernie said. “Industry leaders are starting to think of how to standardize industrial asset monitoring and incorporate these technologies into their long-term business objectives. In the next year or two, you can expect to see mass adoption of wireless sensors and automated analytics systems within many industrial organizations.”