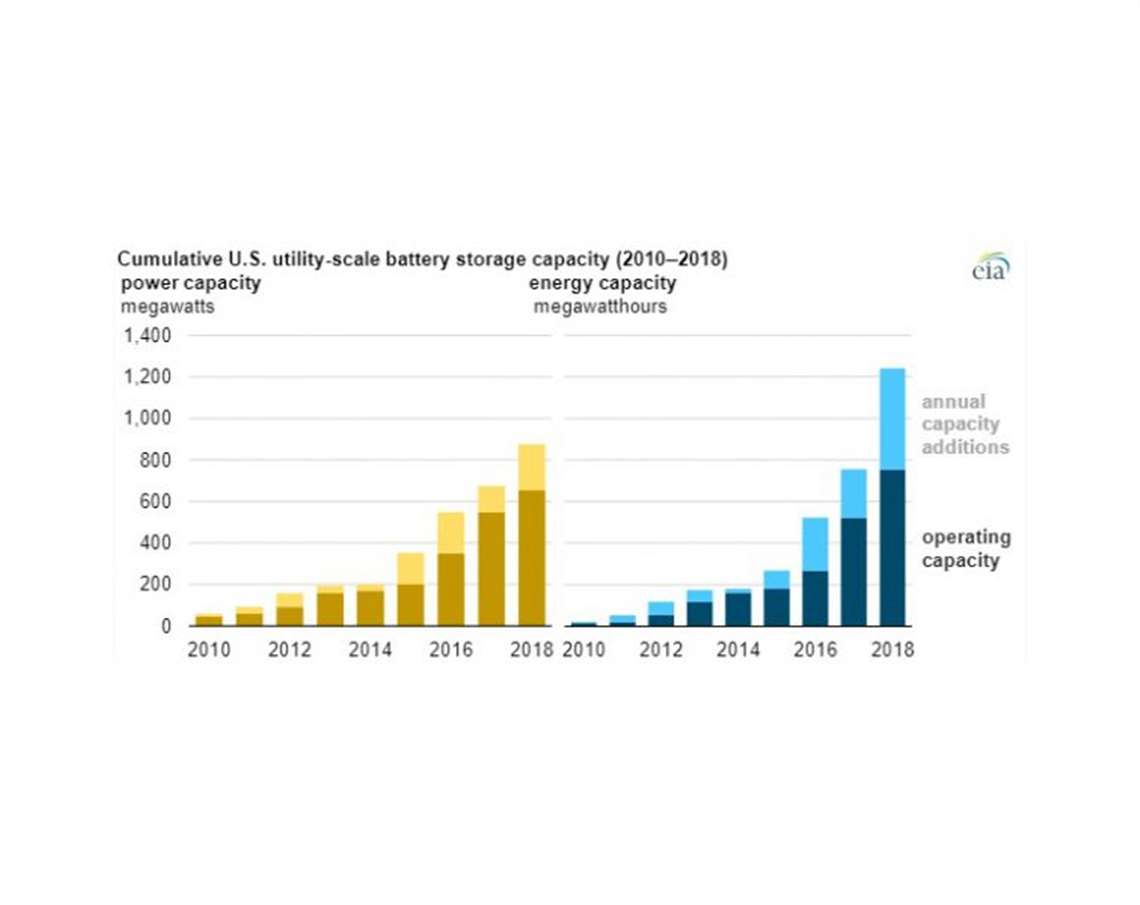 In 2010, the United States had seven operational battery storage systems, which accounted for 59 MW of power capacity (the maximum amount of power output a battery can provide in any instant) and 21 megawatthours (MWh) of energy capacity (the total amount of energy that can be stored or discharged by a battery).

By the end of 2018, the United States had 125 operational battery storage systems, providing a total of 869 MW of installed power capacity and 1236 MWh of energy capacity, according to the U.S. Energy Information Agency (IEA).

Battery storage systems store electricity produced by generators or pulled directly from the electrical grid, and they redistribute the power later as needed. These systems have a wide variety of applications, including integrating renewables into the grid, peak shaving, frequency regulation, and providing backup power.

Most utility-scale battery storage capacity is installed in regions covered by independent system operators (ISOs) or regional transmission organizations (RTOs). Historically, most battery systems are in the PJM Interconnection (PJM), which manages the power grid in 13 eastern and Midwestern states as well as the District of Columbia, and in the California Independent System Operator (CAISO). Together, PJM and CAISO accounted for 55% of the total battery storage power capacity built between 2010 and 2018. However, in 2018, more than 58% (130 MW) of new storage power capacity additions, representing 69% (337 MWh) of energy capacity additions, were installed in states outside of those areas.

In 2018, many regions outside of CAISO and PJM began adding greater amounts of battery storage capacity to their power grids, including Alaska and Hawaii, the Electric Reliability Council of Texas (ERCOT), and the Midcontinent Independent System Operator (MISO). Many of the additions were the result of procurement requirements, financial incentives, and long-term planning mechanisms that promote the use of energy storage in the respective states. Alaska and Hawaii, which have isolated power grids, are expanding battery storage capacity to increase grid reliability and reduce dependence on expensive fossil fuel imports.

Average costs per unit of energy capacity decreased 61% between 2015 and 2017, dropping from $2,153 per kilowatthour (kWh) to $834 per kWh. The large decrease in cost makes battery storage more economical, helping accelerate capacity growth. Affordable battery storage also plays an important role in the continued integration of storage with intermittent renewable electricity sources such as wind and solar.

Additional information on these topics is available in the U.S. Energy Information Administration’s (EIA) recently updated Battery Storage in the United States: An Update on Market Trends. This report explores trends in battery storage capacity additions and describes the current state of the market, including information on applications, cost, market and policy drivers, and future project developments.