The four pure car and truck carriers (PCTC) will run on liquefied natural gas (LNG), with WinGD’s 7X62DF-2.1 two-stroke engines coupled with shaft generators, DC-links and battery systems. Based on its in-depth knowledge of the main engine’s performance WinGD said it has optimized spinning reserves, peak shaving, and energy flow to run the main engine constantly at i 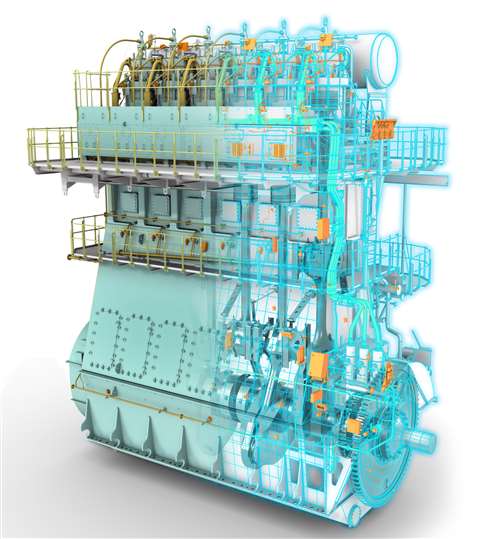 Combined with other ship design enhancements, the LNG-battery configuration is expected to cut overall CO2 equivalent emissions by around 40% compared to conventionally powered vessels operating on heavy fuel oil, taking them beyond IMO’s 2030 target for cutting greenhouse gas (GHG) emissions.

“Battery hybrid technology improves fuel efficiency and emissions by mitigating main engine and electrical generator load fluctuations,” said Keita Fukunaga, deputy manager, ship design team, technical group at NYK LINE. “This project is an important step in our plan to replace current vessels to newly built LNG-fueled PCTCs, reducing the fleet’s carbon intensity by 50% by 2050. We are delighted to contract with WinGD to integrate this innovative power and propulsion arrangement.”

“This important landmark showcases WinGD’s core engine development expertise and the extensive investments we have been making to understanding how to optimize the operational characteristics of integrated hybrid systems,” Goranov said.

WinGD believes that the low-speed two-stroke engine must remain at the heart of any hybrid energy configuration for deep-sea merchant vessels. With its step into system integration, the company brings its expertise to the holistic design of power arrangements that can incorporate batteries, shore power interfaces, solar or wind power generation, fuel cells, frequency converters and energy management systems.

Peak shaving is just one example of the operating modes that hybrid power systems can deploy to make deep-sea shipping more efficient. As low-speed engines are inherently more efficient than four-stroke engines, the carefully managed use of the main engine and electrical energy management aided by batteries can optimize the loading of auxiliary engines. Other modes include efficient port maneuvers and bow thruster operation, and the use of batteries rather than auxiliaries to provide spinning reserve in case of the need for emergency power.

WinGD said this project marks another significant step forward in the company’s commitment to the energy transition within shipping. The expertise gained within the well-established X-DF fleet, paired with customers dedicated to improving the sustainability of their assets, is ensuring progress towards this goal.

The vessels will be built by China Merchants JinLing Shipyard (Nanjing) for delivery in 2023. They are expected to be assigned to transport vehicles mainly between Europe and the Middle East.